Go to the main content of the page
PhD Students

How foreign students can submit an AUTHORISED PDF FORM to the University of Lleida’s Registry?

The 5% of each doctoral program places will be reserved for students who have a degree of disability equal or greater than 33%. If these places were not covered, they would be offered to the rest of students.At the moment of formalizing the admission (or the enrollment), the student must prove the degree of disability, providing the certificate of disability issued by the competent administration.

Students wishing to access a doctoral programme verified by RD 99/2011, must meet the requirements laid down in Article 6.

Likewise, also they have to conform the requisites foreseen at the article 7 of the academic Regulations on Doctoral Courses:

7.1 To access doctoral courses, candidates must hold an official Spanish bachelor's degree, or equivalent, and a university master's degree.

7.2 People in any of the following circumstances will also be admitted:

7.2.1. Holders of an official Spanish university qualification, or from any other country that belongs to the European Higher Education Area (EHEA) that entitles them to join a master's degree in accordance with the provisions set out in article 16 of Royal Decree 1393/2007, of 29 October, and who have passed at least 300 ECTS credits in their university studies overall, of which at least 60 must be of master's degree level.

7.2.2 Holders of official Spanish bachelor's degrees that are only awarded if at least 300 ECTS credits have been passed, in compliance with EU laws. Such candidates must mandatorily take a bridging course, unless the curriculum of the degree course they passed included research training credits equivalent to the weighting of those awarded on a master's degree course.

7.2.4 Holders of a degree obtained in education systems abroad, which will not be subject to homologation if the UdL is able to verify that the degree in question has been accredited to a level equivalent to a Spanish master's degree and that it entitles students from the issuing country to access doctoral courses. Under no circumstances will such admissions subject to the homologation of the degree held by the interested party or its recognition other than for the purposes of joining a doctoral course.

7.2.5 Holders of another doctoral degree obtained in accordance with the above university regulations.

7.2.6. Degree holders, architects and engineers who hold a diploma of advanced studies, obtained pursuant to the provisions of Royal Decree 778/1998, of 30 April, or who have obtained the research proficiency certificate regulated by Royal Decree 185/1985, of 23 January, as provided for in the second additional provision of Royal Decree 99/2011, of 28 January.

7.2.8 Holders of an official Spanish degree, or a diploma in a technical subject or architecture obtained in the education system prior to the official introduction of the European Higher Education Area, providing their admission is approved by the academic committee of the doctoral programme and it considers that they fulfil the access requirements set out in article 6.2a of Royal Decree 99/2000, of 28 January, which regulates doctoral courses.

7.3 For the purposes of calculating credits, 1 LRU credit (awarded before the introduction of ECTS credits) is equivalent to 1 ECTS credit. 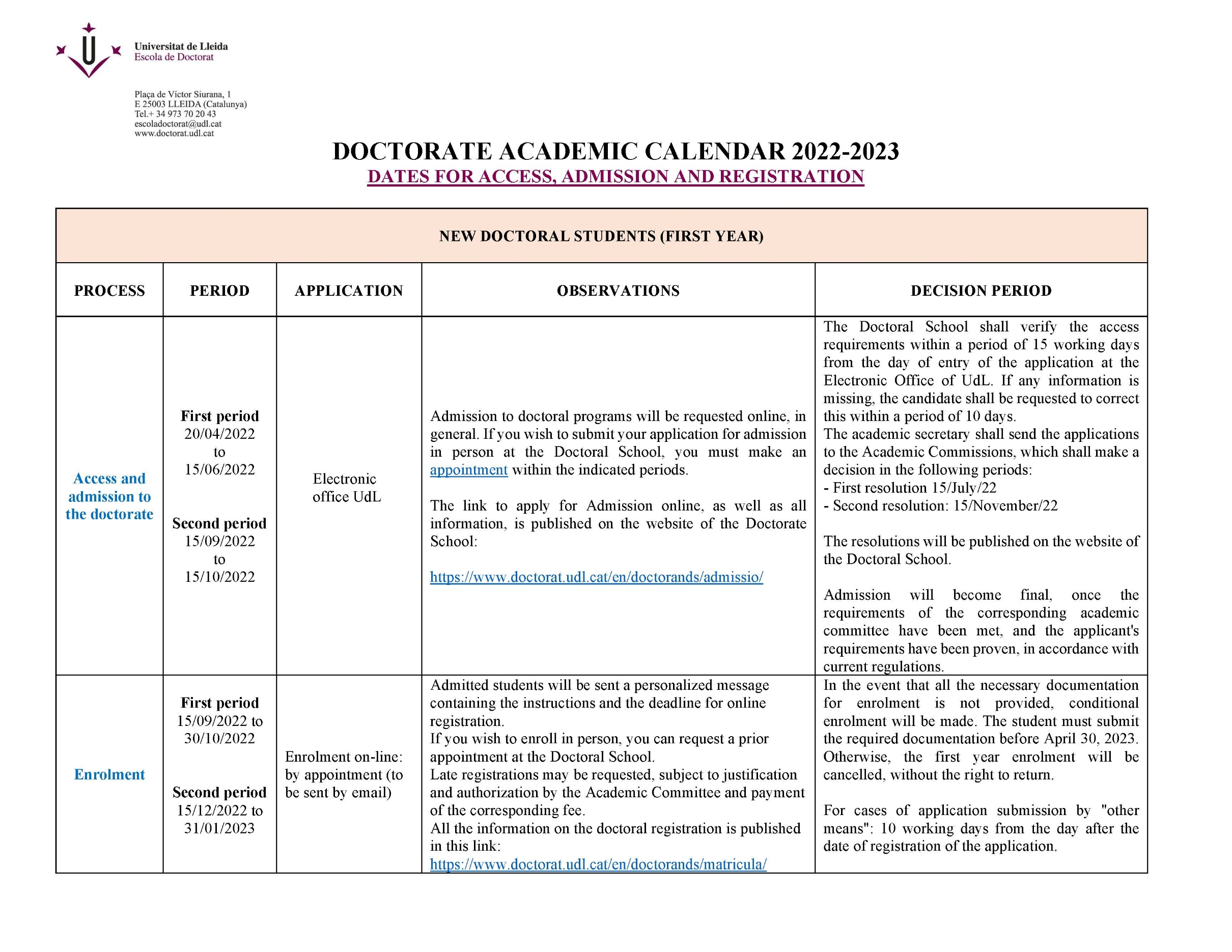 The list of admitted and excluded to the 1st period of the 2021/2022 academic year, to the following Doctorate programs is published:

PhD Programme in Agricultural and Food Science and Technology

PhD Programme in Education, Society and Quality of Life

NOTE: Applications submitted after the deadline, as they are related to an application for predoctoral aid, will be resolved and notified individualy

How present a generic instance with user and password UdL in the Electronic Headquarters?